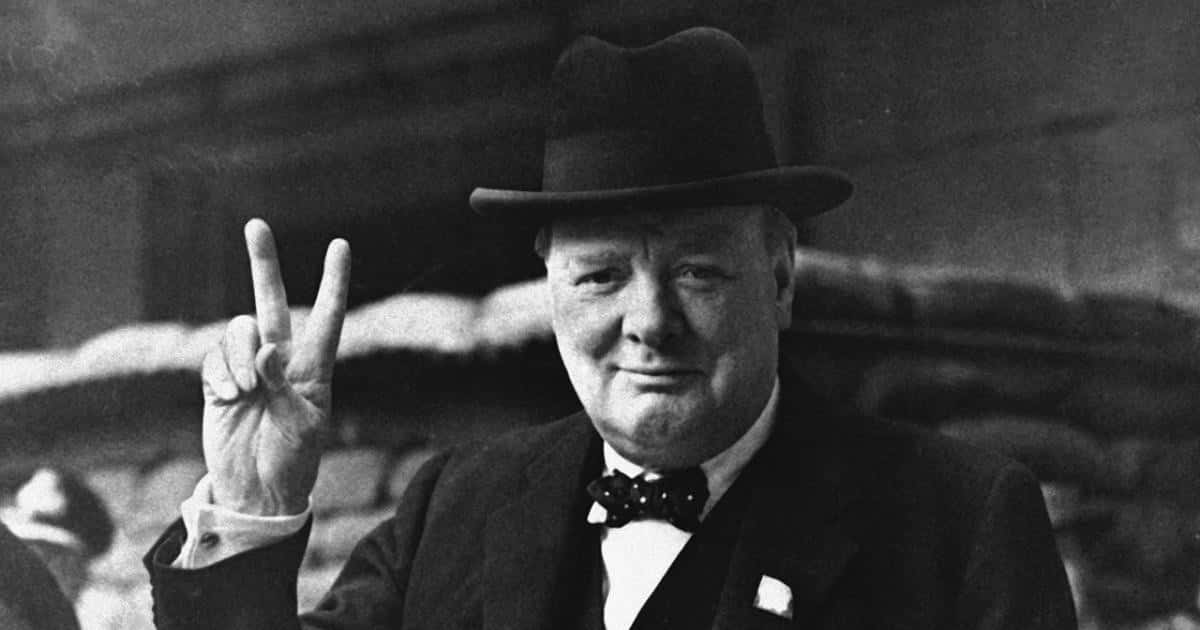 Hollywood still hasn’t come to grip with Winston Churchill and his plan to exterminate German civilians.

In the recent movie [easyazon_link identifier=”B078R5T25R” locale=”US” tag=”veteranstoday-20″]Darkest Hour[/easyazon_link], they portray Churchill as a man of the people. Church did everything he could to avoid a bloody war with Germany, Darkest Hour tells us, and he even asked the average person about their opinions on how to avoid the looming war with Hitler.As we shall see, this is complete baloney. But that’s not all. Gary Oldman, who stars as Winston Churchill in the biopic, made even more stupid statements when he declared that “Churchill was the man who saved the world. That’s what I hope people will take away: To see the film and realize, ‘Oh boy we came very close to a different way of living.’”

When Oldman was asked the question, “What do you want audiences to talk away from the film?,” he responded: “It highlights the fortitude and resilience and the humanity of its leader, Winston Churchill. We screened the movie, and I could forgive the Americans for not knowing the history, but I was amazed that Britons didn’t really know it either.”

If you like a good laugh, then consider this. When Oldman was again asked, “What did you learn about Churchill while shooting the film?,” he said:

“His stock rose considerably. I realize that this was a man, he was incomparable. I don’t know if you could equate him or contrast him with other leaders. I think perhaps he’s there up with Washington and Lincoln. The achievements…He was a superman. An indispensable figure.”

[easyazon_image align=”left” height=”500″ identifier=”B078R5T25R” locale=”US” src=”https://m.media-amazon.com/images/I/51Vgm4zHsuL.jpg” tag=”veteranstoday-20″ width=”250″]The humanity of Winston Churchill? Did Oldman have a different Churchill in mind when he said this? Did he actually know Churchill’s track record even during World War I? What Darkest Hour teaches us is simply this: Gone is the true history of Winston Churchill—all that is left is Hollywood’s deliberately distorted and dubious account of the man who did not hesitate to kill multiplied thousands of civilians to please his bosses.

Even the Irish Independent had this to say back in 2012: “Everything people believed about Hitler’s intentions toward Britain was a myth created by Churchill.” For example, Churchill perpetuated the categorical lie that Hitler desired to invade Britain in 1940, but it was a total fabrication.

On the contrary, Hitler “admired the British Empire,” and that he “offered terms that did not involve German control of Britain. Churchill refused to allow these terms to be read to the cabinet, and they remain prudently concealed under the 100-year rule.” The same newspaper rightly reported:

“Instead, Churchill’s determination to keep Britain at war turned what had been merely a continental defeat of its army into the enduring myth that in 1940, Britain faced a war for national survival.

“But the German naval leader, Raeder, had repeatedly forbidden his staff from planning an invasion of Britain. And far from wanting to continue the war, in June 1940, Hitler ordered 20pc of his army to be demobilized, in order to get the German economy going again.

“The ‘invasion fleet’ that the Nazis began to assemble that summer was no more capable of invading Britain than it was Hawaii. It was war by illusion: its purpose was to get the British to the negotiating table.”[5]

Perhaps the bigger issue is that Churchill concocted deliberate lies about Hitler because he was working for the Powers That Be. In fact, right after his father’s death, Churchill became Ernest “Cassel’s creature,” one of the most “influential Jewish moneylenders” then. Once that happened, Churchill began to hate the Germans. In the process, he starved the German civilians to death and bragged about it. This is Churchill at his best:

Churchill got his wish:

“In December 1918 the German Board of Public Health claimed that 763,000 Germans had died because of the blockade. In April 1919 Dr. Marx Rubner claimed that another 100,000 Germans who died between April and the signing of the Treaty of Versailles in July, so the number of Germans who died from Winston Churchill’s starvation blockade most probably approximates the number of Irish who died during the Great Famine.”

Gary Oldman should have told his interviewer that Churchill ended up joining the greatest mass murderer (Stalin) in the twentieth century in order to defeat Hitler. In 2013, popular historian Max Hastings wrote in the Daily Mail that Churchill did summon “bold lies to wage war,” but those lies were good because “Churchill did it to save Britain…”

Churchill was an avowed social Darwinist and flaming Zionist at the same time. Churchill became Prime Minister in 1940. During his speech, he unequivocally declared:

Here once again we see the incestuous relationship (or competition) between the Darwinian ideology and Jewish subversive movements. Both Zionism and Darwinism support the promiscuous idea that wars will bring about the greatest good—at the expense of the weak and needy. Wars, according to Darwin, is inevitable because the “higher animals” need to wipe out the “lower” ones.

The Malthusian doctrine, said Darwin, could be applied “with manifold force to the whole animal and vegetable kingdoms.” In that sense, “the preservation of favoured races in the struggle for life,” which incidentally is the subtitle of Darwin’s On the Origin of Species, is of primary importance.

Darwin, in a covert and pernicious way, subverted the moral order and replaced it with the “favoured races.” It was no coincidence that colonial empires were viewed in a Darwinian terminology. As one historian puts it,

“Contemporaries explained this rush for land in terms of Darwin’s evolutionary theories. The fittest and most adaptable of the great powers would survive and grow stronger at the expense of the enfeebled…As Churchill observed in 1899, ‘the position of England among the nations is the position of a dog with a bone in the midst of a hungry pack.’”

At one point, Churchill said: “I hate Indians. They are a beastly people with a beastly religion.” Toye writes that Churchill “gave his views on the Indian famine of 1873-4, claiming that Viceroy had been right to refuse demands that he prohibit grain exports.” Another observer writes that

“Churchill had corroborated Malthus’s perspective, writing of an 1898 Indian plague: ‘a philosopher may watch unmoved the destruction of some of those superfluous millions, whose life must of necessity be destitute of pleasure.’”

“I am strongly in favour of using poisoned gas against uncivilized tribes. The moral effect should be so good that the loss of life should be reduced to a minimum.”

“I do not admit for instance that a great wrong has been done to the Red Indians of America, or the black people of Australia. I do not admit a wrong has been to those people by the fact that a stronger race, a higher-grade race or… a more worldly-wise race…has come in and taken their place.”

When people were objecting to his views about poisoned gas, Churchill said that they were being too squeamish, adding that

“the objections of the India Office to the use of gas against natives are unreasonable. Gas is a merciful weapon than [the] high explosive shell, and compels an enemy to accept a decision with less loss of life than any other agency of war….Why is it not fair for a British artilleryman to fire a shell which makes the said native sneeze? It is really too silly.”

It got even better: “when an aide pointed out that Tito intended to transform Yugoslavia into a Communist dictatorship on the Soviet model,” Churchill responded by saying, “Do you intend to live there?”

Churchill, as should be evident by now, has a history of liquidating civilians mercilessly. He said way back in 1915, right after World War I broke out:

“I know this war is smashing and shattering the lives of thousands every moment—and yet—I cannot help it—I love every second I live.”

Churchill continued, “The twin roots of all our evils, Nazi Germany and Prussian militarism, must be extirpated. Until this is achieved, there are no sacrifices we will not make and no lengths in violence to which we will not go.”

When Stalin was sending people by the millions to the Bolshevik slaughter house, Churchill thought it was a great idea. He said:

“Why are we making a fuss about the Russian deportations in Rumania of Saxons [Germans] and others?…I cannot see the Russians are wrong in making 100 or 150 thousand of these people work their passage….I cannot myself consider that it is wrong of the Russians to take Rumanians of any origin they like to work in the Russian coal-fields.”

Again, after the destruction of Dresden, Churchill tried very hard to wash his hands off. He said: “I cannot recall anything about it [Dresden]. I thought the Americans did it.” When all is said and done, it was pretty clear to perceptive observers and historians that Churchill and Roosevelt intended to destroy Germany.

By 1919, Churchill already had blood all over his hands. “We are enforcing the blockade with rigour,” he said, “and Germany is very near starvation.”When the dust settled, Churchill ended up slaughtering almost 90,000 German civilians. He also was responsible for the deaths of more than a million Indians.

“Britain’s wartime prime minister did not discuss in his six-volume account the 1943 famine in the eastern Indian province of Bengal, which killed 1.5 million people by the official estimate and 3 million by most others.

[easyazon_image align=”left” height=”500″ identifier=”1101980990″ locale=”US” src=”https://m.media-amazon.com/images/I/51iLzOU-hoL.jpg” tag=”veteranstoday-20″ width=”250″]“One primary cause of the famine was the extent to which Churchill and his advisers chose to use resources of India to wage a war against Germany and Japan, causing scarcity and inflation within the colony.”

This is the man that Hollywood, the entire Holocaust establishment, the Neoconservative movement, and outlets like the Rolling Stone revere. The Rolling Stone, the BBC, and the Guardian actually hope that Oldman will receive an Oscar for his performance as Churchill in the Darkest Hour.

In a review of the film, A. O. Scott of the New York Times declares that Churchill “enjoys the push and pull of politics, the intellectual labor of problem-solving and the daily adventure of being himself.” We are also told that ““Darkest Hour” is proud of its hero, proud of itself and proud to have come down on the right side of history nearly 80 years after the fact. It wants you to share that pride, and to claim a share of it.”

What is missing in these flattering and sweeping pronouncements is that the average person never gets to know who Churchill really was: was a mass-murdering clown whose god was Mammon and whose diabolical enterprise left Germany and India in ruin.

Churchill was willing to steal, kill, and destroy the people who actually put him in power. Hollywood and the Neoconservatives have been deliberately ignoring or dismissing the historical accounts on Churchill in order to maintain the historically incoherent view that Churchill was “fighting against international terrorism and tyranny.” What these people end up saying is that German civilians and Indians were incontrovertibly terrorists.