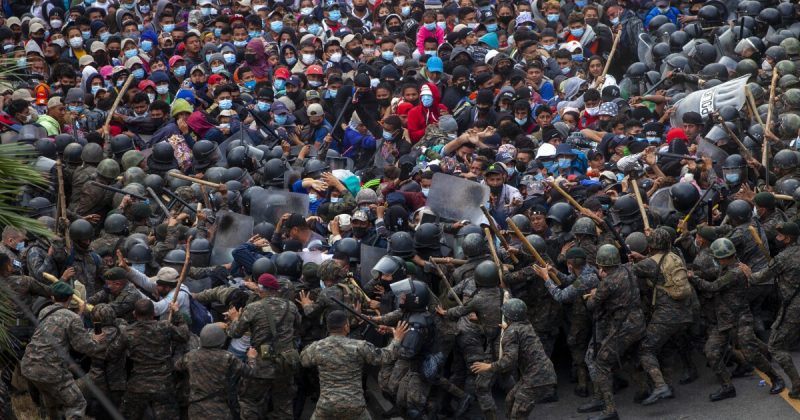 White Hats on Monday sent “a sizable force” to the southern border after confirming reports that many men among a caravan of 12,000 (and growing) would-be illegal immigrants are armed and marching toward Eagle Pass, Texas, just north of the Rio Grande.

A high-ranking source in the White Hat community told Real Raw News on Monday that the U.S. military has drone footage showing “several thousand” asylum-seekers carrying Kalashnikovs. RRN has not reviewed the video, which if accurate directly contradicts how mainstream media have portrayed the army rapidly encroaching toward U.S. soil—the crippled, the disenfranchised, and impoverished parents with starving children in tow. The MSM and its liberal political allies are eager to adopt illegals as potential voters for the equally illegal Biden regime.

Our source claimed White Hats gave their footage to Fox News, ostensibly a conservative outlet, but the network refused to air it, citing “FCC prohibitions.” The FCC—an archaic institution that ought to be abolished—has for decades been entrenched in the Deep State and is partly responsible for the obfuscation of what’s really happening in today’s world, including the true nature of caravans of future illegal immigrants.

“The pictures shown to the public on mainstream are cherry-picked or recycled from a few years ago,” our source said. “It’s extremely disheartening—the stranglehold the FCC has over all network media. There’s 2,000 men in that caravan with AK-47s and AK-74s, thrusting them in the air in some sort of rebellious gesture, chanting in Spanish that they’re “going to the U.S.A. no matter what,” and the MSM is showing is pics of kids dressed in brand name clothes—Nike, Adidas, Reebok—saying they’re a repressed people in search of a better life, and deserving of U.S. government assistance. The deception is insane.”

On Monday evening, he said, White Hats mobilized “a lot of” active-duty soldiers, primarily from the Special Operations community. Although he would not quantify how many troops were involved in the operation, he said “plenty of experienced volunteers” were eager to uphold the U.S. Constitution and repel an armed invasion against U.S. sovereignty.

He added, however, that White Hats would engage only armed insurgents who cross or fire across the U.S.-Mexico border.

“We’re going to protect our nation against criminal illegals, but we still have rules of engagement,” he said. “If a Mexican or Guatemalan sets foot in our country with a firearm, it’s weapons-free. Unfortunately, we can’t deter all illegals, but will prevent an armed incursion.”

Weapons-free is military jargon giving U.S. soldiers permission to engage any target not identified as friendly.

Asked if Texas Gov. Greg Abbott was notified of the mission, our source said, “We didn’t seek his consent, but he’s been made aware. If push comes to shove, we want to avoid confrontation with Texas law enforcement.”

White Hats, however, are more concerned with how federal agencies like ICE and U.S. Border Control will react to their presence.

“Let’s be clear: federal agencies, all federal agencies right now, are controlled opposition. While they’re crying on MSM about border intrusions, they’re also letting cartel and gang members freely enter the country. If we see a federal agent aiding, or showing sympathy toward, an armed illegal, that agent will be deemed an enemy combatant,” our source said.