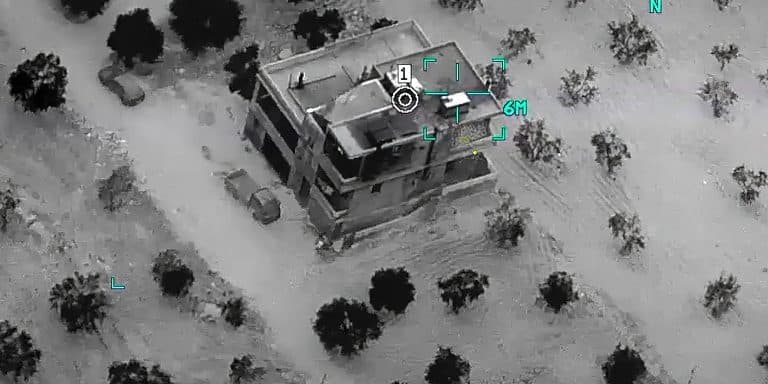 The time zone is the biggest problem in the United States of America when they decide to carry out some of the special missions to kill an ISIS terrorist, trained and armed thanks to the CIA’s cradle of funding for the Arab Springs and the civil war in Syria. The regime-change in Damascus was in fact planned by the Central Intelligence Agency, the counter-espionage of Langley (Viriginia) as early as 1983, as revealed exclusively by Veterans News thanks to a declassified document.

While in the White House they were resting awaiting the triumphal awakening on Thursday morning to communicate to the world the killing of Abu Ibrahim al-Hashimi al-Qurayshi, the new head of the Islamic State after the alleged elimination of the founding caliph Abu Bakr Al Baghdadi, some Middle Eastern agencies, including the Syrian government SANA, had already reported the massacre of at least 13 civilians, including children, in the north of Idlib for a drone raid attributed to the US Air Force.

American President Joseph Biden at the press conference instead stated that he had ordered to «conduct a ground operation instead of an air strike to protect civilians living in the same residential building as al-Qurayshi who did not have any affiliation with ISIS» wrote Defense One referring what the senior administration official told reporters.

The White House had also explained that the leader of the Islamic cutthroats seeing himself surrounded had blown himself up together with his family, thus justifying the devastation of the house and the other victims.

But now not even CNN believes him and UNICEF confirms the victims referring to a scenario of devastating bombings.

“ UNICEF confirms that at least six children were killed and one girl was badly injured overnight in the border town of Atmeh in the northwest of Syria due to heavy violence. According to reports, civilian-populated areas were severely damaged” Bertrand Bainvel, UNICEF’s Interim Regional Director for the Middle East and North Africa, wrote in a statement.

“Since the year began, violence has heavily escalated in and around Idlib in Syria’s northwest, home to 1.2 million children in need of assistance. Many families in the area are internally displaced, having fled violence in other parts of Syria over the years” adds the UN Childhood Agency, describing a very different scenario from that designed by the White House.

THE DOUBTS OF CNN AND SOUFAN CENTER

On the issue Stephen Collins and Shelby Rose, CNN journalists, who have always been very close to the Democrats, wrote an incisive article entitled “The fog of war”.

A very correct title given that, as we will reveal at the end of this report, the same ISIS leader killed was actually released in 2008 from the Camp Bucca prison following the same fate as Al Baghdadi. But let’s stay on the massacre for now.

Here is the essential passage wrote by the American journalists: «President Joe Biden said that the terrorist group’s leader blew himself up and killed civilians in the process. That might well be the case — but a journalist asked the government to prove it amid a discrepancy over the civilian death toll».

«Psaki wondered why reporters were “skeptical of the US military’s assessment when they went and took out … the leader of ISIS? That they are not providing accurate information — and ISIS is providing accurate information?” Information that contradicted the US claim that four civilians and five combatants died in the attack didn’t come from ISIS but from the White Helmets, a Syrian civil defense group, that said at least 13 people died including six children and four women» added CNN.

The issue is implicitly questioned also by the geopolitics and intelligence analysis site The Soufan Center which, after sending a newsletter with the official version «at least 13 people, including 10 women and children, were reportedly killed during the raid when al-Quraishi detonated explosives» he then updated the article by removing the part of the sentence from “when” onwards.

And a detail of the article further refutes the claim of the only ground operation:«Some reporting suggests that the U.S. was aware of al-Qurayshi’s location for weeks, since early December. The operation occurred close to the Turkish border and included Apache gunships and drones».

«But it shouldn’t be a surprise that reporters are doing their jobs. There’s a long list of occasions when the US government has lied to Americans — about the Vietnam and Iraq wars, for instance. And the Biden administration ceded the benefit of the doubt with flagrantly misleading assessments about the situation in Afghanistan during the chaotic US withdrawal that left many civilians who helped the US war effort behind to face their fates at the hands of the Taliban» Collins and Rose added for CNN.

This was confirmed by our reports on Kabul, abandoned by the US military but remained under the influence of occult CIA secret agents and Mossad, the Israeli counterpsionage, and on the ISIS attacks on the mosques of the Shiites, the majority Muslims in Iraq. and Iran considered enemies by the Salafist Sunnis among which all the most famous terrorist groups have sprung up: Al Qaeda, Islamic State and Hayat Tharir al Sham (HTS).

THE TERRORISTS ARMED BY TURKEY WITH THE NATO CLEARENCE

Biden’s embarrassment for the diffusion of a different version of the US attack is understandable given what happened in Afghanistan where an American drone on September 10 last, BY WRONG, exterminated a family of 10 people including 7 children thinking that the cans loaded on the car by his father were of explosives while it was of simple water.

But a US Air Force killer drone attack had already occurred on June 27 in Syria in Bukamal, in the province of Deir Ezzor, where the Americans continue to steal oil thanks to the coverage of the nearby Al Tanf base, on the border of Jordan and Iraq.

To target Iranian-backed militia groups, including Kata’ib Hezbollah (KH) and Kata’ib Sayyid al-Shuhada (KSS), UAVs armed with missiles and bombs, which made the fortune of the Freemason and Zionist tycoon of industry Elbit, killed a child.

However, it is not only these murderous operations that raise serious doubts about Biden’s real intentions in the Middle East. The province of Idlib is in fact a stronghold of HTS Qaedists armed and protected for years by Turkey for its invasions in Rojava, the Syrian north-east, where it uses the jihadists as mercenaries against the Syrian army and that of the Kurdish Syrian Democratic Forces and where unseemly war crimes are committed by islamic terrorists.

This happens with the tacit approval of NATO which does not interfere with MIT operations, the intelligence of President Recep Tayyp Erdogan, but even applauds them as happened when Turkey sent 14 thousand jihadist paramilitaries to Libya to defend the government of Tripoli: between they were identified at least 229 international terrorists.

The Idlib border between Syria and Turkey, where the American blitz took place with the killing of al-Qurayshi, is also the escape route for ISIS terrorists who, either in favor of the Turkish 007 or for money, manage to obtain a passage to the European Union.

«On the heels of the massive ISIS attack in Heseke, attacks continue in north and east Syria. Turkey and Turkish backed SNA militias launched a major operation into northern Syria last night, which they named Operation Winter’s Eagle. The Turkish Defense Ministry announced this afternoon that they hit 80 predetermined targets across NES, including in the regions around Derik, Manbij, Al Bab, Tel Tamr and Shehba, and that the operation is now “successfully completed”. Turkey also bombed the Yazidi region of Sengal and Maxmur camp in Iraq».

This is what was communicated on Wednesday 2 February by the Rojava Information Center which follows the Kurdish administration AANES which controls the Syrian north-east after the SDF militias freed it from the Islamic State with the help of the American army although the People’s Liberation Movement of Iraq, which has already threatened revenge for the Turkish aggression, continue to regard ISIS as a creation of Caliph Al Baghdadi as a secret agent of the CIA and the Israeli Mossad.

These new attacks were also confirmed by the Syrian agency SANA which, however, highlighted a controversial clash also in another hot area: «Ten civilians were martyred and nearly 32 others were injured in mutual bombardment between the Turkish occupation and its terrorists from one side, and militants of QSD militia from another side, in al-Bab city in the northern countryside of Aleppo. Local sources and identical media reports said that mutual bombardment, through rocket shells and heavy artillery between Turkish occupation mercenaries and US-backed QSD continued for several hours since today’s morning. The sources added that a number of rocket artillery shells fell on residential neighborhoods in al-Bab city in the northern countryside of Aleppo, claiming the lives of ten civilians».

But in a statement the Syrian Democratic Forces (SDF) clarified the responsibilities.

‘The claims are groundless, and adopted by websites sponsored by Turkish occupation state and its mercenaries, we confirm that our forces have no relation to the shelling or any other similar incidents fabricated by the Turki8sh state in line with the ISIS terrorist attack on the Sina’a Prison in the city of Hasaka” according to the press release reported by the Kurdish agency ANHA.

ISIS PRISONERS RELEASED FROM THE USA AS THE KILLED LEADER

The assault on Al Sina prison, which ended with a toll of over 300 dead among jihadists prisoners and aggressors, and over 100 among SDF, special forces and civilians, was the subject of various speculations after Veterans Today, the American website of geopolitics and military intelligence, reported the SouthFront news on the release of 23 SDF soldiers captured by ISIS cutthroats in exchange for the release of 200 prisoners who were then transported to the American base of Al Tanf to be sent for re-employment.

The news was denied by the Kurdish militias but remains absolutely credible. This happened several times when John Bolton was President Donald Trump’s national security adviser, as was also reported by the director of the FSB, Russian intelligence.

So where is the US facing the CIA-armed jihadists with powerful TOW missiles? What are your intentions with ISIS? What did some military intelligence officers from NATO countries do at a summit with Islamic State commanders?

One should ask Defense Secretary Lloyd Austin who in September 2015 was called to Capitol Hill by Congress to report as chief general of US headquarters in the war against the Islamic State group for poor results.

Austin was even “greeted with a chuckle” by the Senate Armed Services Commission when he explained “that an effort to train Syrians that was originally expected to produce 5,400 trained fighters a year has so far only resulted in “four or five” who still remain on the ground and active in combat” as that time wrote US News..

But the final pearl comes last: «The files, released Thursday, suggest that Muhammad Sa’id Abdal-Rahman al-Mawla (real name of Abu Ibrahim al-Hashimi al-Qurayshi – ed) provided US forces with the names of 68 al-Qaeda fighters and the facility. of al-Qaeda in Mosul, Iraq, after being arrested in 2008 and detained in Campo Bucca» wrote MiddleEastEye on September 2020 as recalled by Nauman Sadiq on Veterans Today.

«Three Tactical Interrogation (TIR) reports published by the Combating Terrorism Center (CTC) claim that Mawla, who was an al-Qaeda judge at the time, identified the leading figures behind the killings, kidnappings and bomb making. improved explosives used to kill coalition forces».

We really wonders why all these honored collaborators of the most powerful army in the world then become terrorists in Syria … We will understand this in the next investigation when we reveal how the European Union has financed terrorist organizations!