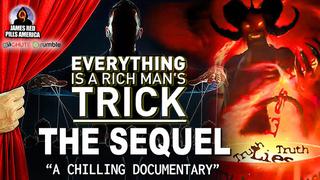 THIS IS THE LONG-AWAITED SEQUEL TO “JFK TO 911, EVERYTHING IS A RICH MAN’S TRICK!” THIS FANTASTIC, MEGA-VIRAL SECOND INSTALLMENT in the “EVERYTHING IS A RICH MAN’S TRICK!” DOCUMENTARY SERIES will keep you on the very edge of your seat, yelling “I KNEW IT ALL ALONG!” Dominated and ruled by the Super Rich and All Powerful Elite, our World has been Intricately Fabricated from the ground up to be something that it is NOT! Forget all the LIES you’ve been told your entire life! Covered in this MEGA-HIT are topics like NESARA / GESARA being in FULL FORCE – Big Pharma & Big Tech GOING DOWN – the Global Elites & MSM are PANICKING right now – PANIC in DC, EU, UN & NATO – the Obama’s & Bush’s Dirty Little Secrets – who is really in control of the Military right now – the Long Hidden Secrets of the Rothschilds and Queen Elizabeth, and COUNTLESS OTHER MIND-BLOWING TOPICS OF TRUTH ARE COVERED!

IMPORTANT NOTE: This movie begins with an extremely important ‘history lesson’ that provides historically accurate details that are important to know in order to fully understand the (modern day) information which follows part one of the movie. Part one ends (roughly) between 30-40 minutes, if you prefer to bypass the introductory segment.

Patriots, I never knew I had SO MANY UNANSWERED QUESTIONS – until this EPIC and POWERFUL movie – “EVERYTHING IS A RICH MAN’S TRICK! THE SEQUEL!”. Every single thing you thought was REAL…was just a LIE or a Fabricated Reality, made to order by the Luciferian Cabal and their Deep State Puppets! During The Great Awakening, we’ve found out more about the REALITY of the world in which we live – and the Truths covered in this EPPIC SEQUEL presentation are absolutely Mind Boggling!

This WORLDWIDE DOCUMENTARY BROADCAST EVENT is excellently laid out in an easy to follow format, each segment building from the previous, into a crescendo of LIGHT & TRUTH that is sure to Dazzle even the most ardent Dis-Believer! Better grab the “Oh, CRAP!” handles for this one, Patriots, it’s going to be a WILD RIDE!