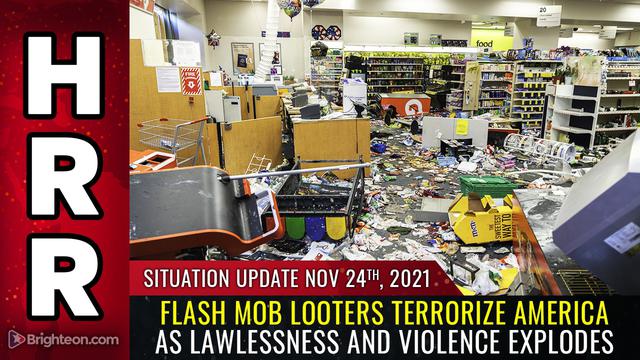 Diana Becton, the progressive district attorney for Contra Costa County in the East Bay of California, is causing an uproar in her jurisdiction over major changes she has made when it comes to how crimes are charged. Now, police officers in her county have to consider whether a looter “needed” the goods they stole before they slap a charge on them.

In the document Becton published containing the guidelines, she said that their main goal is to promote “equitable filing practices.” This means that, before her office will even think about pressing charges against looters, they will have to take into consideration these five key points:

This means that the DA’s office has to go through each of the five points, which includes conducting a psychological and financial analysis of the suspect, before they can file charges.

Under California law, the crime of “looting” is strictly defined as an individual “taking advantage of a state of emergency to commit burglary, grand theft or petty theft.” People charged with looting can face up to three years in jail.

With Becton’s new guidelines for prosecuting looters, it will be much more difficult for law enforcement officers to put criminals in jail and off of the streets. This will allow these criminals to escalate their actions, knowing that the police will not be able to put them away.

Putting race before the law

Becton, along with several other progressive DAs across the country, are pushing for lighter punishments for rioters. She, along with the DAs for Suffolk County, Massachusetts; Durham County, North Carolina; Cook County, Illinois and St. Louis, Missouri, even published an opinion piece on Politico detailing how they believe America’s criminal justice system, which they say was made “to control Black people and people of color,” must place lighter sentences on minorities. Coincidentally, all five district attorneys who penned the op-ed are Black.

Instead of deterring crime with harsh punishments, Becton and the other attorneys believe that American society itself must change in order to better accommodate their needs. They also point to policies implemented across the country that help criminals go free, such as declining to prosecute minor offenses and refusing to take cases from officers suspected of being “racially biased.”

As elected officials use the law for their political gain, ordinary people across the country have been forced to take up arms in order to defend life and property. Listen to this episode of the Health Ranger Report, a podcast by Mike Adams, the Health Ranger, to learn about one such person, Kyle Rittenhouse, the young man who had to heroically defend himself against Black Lives Matter thugs who could have taken his life in Kenosha, Wisconsin, if he had not defended it.

Unfortunately, many of these left-wing district attorneys are already putting their planned policies into action, such as Mike Schmidt, the new leftist district attorney for Multnomah County, Oregon. Schmidt, in his first week on the job, effectively dismissed charges against most of the 600 rioters that were detained in Portland’s jails, to the objections of law enforcement officers and other public officials in the county. Moving forward, Schmidt will also be declining to prosecute rioters charged with so-called “minor offenses” such as interfering with police officers, trespassing and disorderly conduct.

Kim Foxx, DA for Cook County, Illinois, is also in hot water for her alleged leniency towards the rioters and looters in Chicago. She has been accused of refusing to charge people arrested for rioting and looting during the current wave of engineered rioting in the city, which began in late May.

“Criminals took to the street with the confidence that there would be no consequences for their actions,” said Chicago police superintendent David Brown. “And I for one refuse to allow these cowardly acts to hold our city hostage.”

Foxx’s reputation has gotten so toxic that even Mayor Lori Lightfoot, a fellow Democrat, has criticized Foxx for going too far. “These people need to be held accountable and not cycled through the system,” she said.

This blatantly unlawful conduct extends not just to DAs allowing Black Lives Matter and Antifa criminals to go free. Some DAs, like St. Louis, Missouri circuit attorney Kim Gardner, are going out of their way to persecute conservatives and other people who are exercising their right to defend themselves and their property.

This is what Gardner did when she decided that she would slap a charge of felony unlawful use of a weapon after Mark and Patricia McCloskey became infamous among liberal circles due to videos taken of them deterring a violent BLM mob from stepping foot on their property using their firearms.

Gardner is also preventing St. Louis police officers from doing their jobs. She placed 15 officers on an “exclusion list,” which means that any charges they file against criminals will likely be dropped and permanently banned seven officers from the Circuit Attorney’s Office.

Becton’s office also has a long history of persecuting conservatives, such as when one of Becton’s deputy DAs, Nichelle Holmes, posted on social media about how she and the whole office wants to charge a couple who painted over a Black Lives Matter mural with “more than a citation for vandalism.” The office later charged the patriotic couple with a hate crime, but this charge will likely be dropped as it will be impossible for their office to prove racist intent.

THEY ARE PURGING HUMANITY – THERE IS NOTHING LEFT TO LOSE – DAVID ICKE TALKS TO ALEX JONES
CAUGHT ON TAPE! NO ONE WOULD BELIEVE BIDEN SAID THIS…WELL, UNTIL HE WAS RECORDED SAYING IT!
To Top