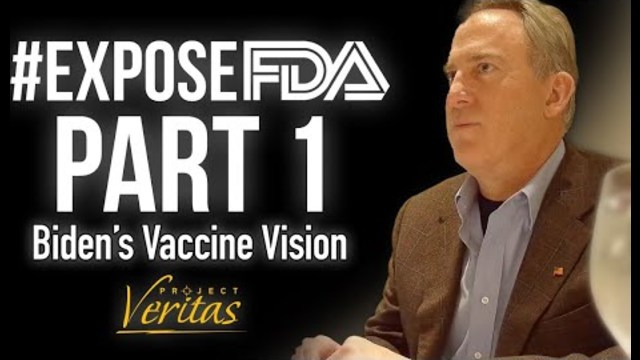 – FDA Executive Officer, Christopher Cole: “You’ll have to get an annual shot [COVID vaccine].  I mean, it hasn’t been formally announced yet ‘cause they don’t want to, like, rile everyone up.”

– Cole on President Joe Biden: “Biden wants to inoculate as many people as possible.”

– Cole on plans to approve vaccine for toddlers: “They’re not going to not approve [emergency use authorization for children five years old or less].”

– Cole on pharmaceutical companies: “There’s a money incentive for Pfizer and the drug companies to promote additional vaccinations.”

– FDA Official Statement: “The person purportedly in the video does not work on vaccine matters and does not represent the views of the FDA.”

Cole is an Executive Officer heading up the agency’s Countermeasures Initiatives, which plays a critical role in ensuring that drugs, vaccines, and other measures to counter infectious diseases and viruses are safe. He made the revelations on a hidden camera to an undercover Project Veritas reporter.

Cole indicates that annual COVID-19 shots isn’t probable — but certain. When pushed on how he knows an annual shot will become policy, Cole states, “Just from everything I’ve heard, they [FDA] are not going to not approve it.”

The footage, which is part one of a two-part series on the FDA, also contains soundbites from Cole about the financial incentives pharmaceutical companies like Pfizer have to get the vaccine approved for annual usage.