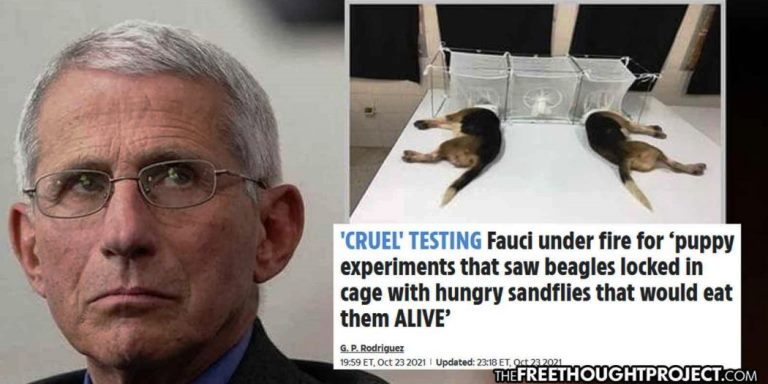 In the last 20 months, Dr. Anthony Fauci has propelled himself into a messiah-like state for half of the country and an outright villain to the other half. He has been caught in lie after repeated lie — up to and including lying to Congress, a federal crime of perjury — yet the media has come to his aid repeatedly. After all, “Attacks on me (Dr. Fauci), quite frankly, are attacks on science.” Yes, he actually said that.

But over the last several months, Fauci’s rise to stardom has begun to slow, specifically after emails were leaked, showing Fauci likely knew about the possibility of the Wuhan lab leak theory and lied about it.

In a February 2020 email from a Cornell University professor of medicine, the professor wrote: “We think there is a possibility that the virus was released from a lab in Wuhan.”

Fauci responded by forwarding the prescient warning to one of his minions: “Please handle.”

A month after this response, a government-funded physicist sent Fauci another warning that China was sending out false data, among other things.

Once again, Fauci dismissively forwarded it to another minion, claiming it was: “Too long for me to read.”

While these emails were being sent, anyone who mentioned the lab leak theory on Facebook, Twitter or YouTube, was unsurreptitiously banned, removed, and censored into oblivion. But the world would soon find out months later that it was the most plausible explanation.

Had he been caught torturing puppies, perhaps then people would listen. Alas, that is now the case and puppies are showing the ability to unite people far more than lying and perjuring himself before Congress.

The White Coat Waste Project recently filed a Freedom of Information Act request and what they found was utterly horrifying. The documents they requested from the National Institutes of Health revealed that the NIAID, led by Dr. Fauci, spent $1.68 million on unnecessary, torturous, and outright sadistic “research” that killed dozens of beagle puppies.

“Our investigators show that Fauci’s NIH division shipped part of a $375,800 grant to a lab in Tunisia to drug beagles and lock their heads in mesh cages filled with hungry sand flies so that the insects could eat them alive,” White Coat Waste told Changing America. “They also locked beagles alone in cages in the desert overnight for nine consecutive nights to use them as bait to attract infectious sand flies.”

According to the group, White Coat Waste also uncovered that he paid to poison puppies too.

According to their report:

Documents obtained by WCW through the Freedom of Information Act show that Fauci’s division at the National Institutes of Health ordered cruel and unnecessary drug toxicity tests on dogs and other animals that cost taxpayers $1.68 million.

In the tests, 44 beagle puppies who were just 6-8 months old were repeatedly injected with or force-fed an experimental drug for weeks, and then killed and dissected.

The documents also show that the Fauci’s NIH division paid to have the puppies’ vocal cords cut out so they couldn’t bark in the lab while they were being abused.

To add insult to injury, these dog tests ARE COMPLETELY UNNECESSARY! The NIH stated that the dogs tests were meant to support a submission to the Food and Drug Administration (FDA), but the FDA has stated clearly as recently as this summer: “The FDA does not mandate that human drugs be studied in dogs.”

Below is a horrifying video showing the abuse. WARNING: Do not watch it if you are sensitive to animal cruelty.

The cruelty against these animals — unlike the cruelty Fauci’s exhibited over the last 20 months to Americans — is hard to ignore. The imagery and wholly sadistic nature of the torture of beagle puppies has apparently crossed the partisan wall and united those on both sides to make sure this stops immediately.

After the revelations, two dozen members of Congress signed onto a letter, lead by Republican Representative Nancy Mace of South Carolina’s 1st congressional district, with a number of questions directed at Fauci.

“We write with grave concerns about reports of costly, cruel, and unnecessary taxpayer-funded experiments on dogs commissioned by National Institute of Allergy and Infectious Diseases,” the lawmakers wrote.

Pointing to White Coat Waste and media reports, the members of the House wrote that “from October 2018 until February 2019, NIAID spent $1.68 million in taxpayer funds on drug tests involving 44 beagle puppies.

“The dogs were all between six and eight months old. The commissioned tests involved injecting and force-feeding the puppies an experimental drug for several weeks, before killing and dissecting them.

“Of particular concern is the fact that the invoice to NIAID included a line item for ‘cordectomy.’ As you are likely aware, a cordectomy, also known as ‘devocalization,’ involves slitting a dog’s vocal cords in order to prevent them from barking, howling, or crying,” the letter went on.

“This cruel procedure – which is opposed with rare exceptions by the American Veterinary Medical Association, the American Animal Hospital Association, and others – seems to have been performed so that experimenters would not have to listen to the pained cries of the beagle puppies. This is a reprehensible misuse of taxpayer funds,” the lawmakers said.

The lawmakers demanded to know how many of these tests have been performed on dogs and what the cost has been. They also demanded to know why they have taken place despite the FDA’s lack of requirement for dog tests.

Highlighting the bipartisan support for the inquiry into Fauci is the fact that Democrats and Republicans equally signed onto the letter.

Fauci may have been able to escape accountability for lying to Congress and the American people, but now he’s messed with the puppies, and puppies most assuredly transcend all party lines.