“Russell-Jay; Gould” The Man Who Captured The US Flag

“I took An Oath To Defend The Constitution.”

THE ENTIRE FEDERAL GOVERNMENT IS BASED UPON FRAUD

THIS IS A MUST SEE

3D to 5D Consciousness:
If you have been following my broadcast for a while, you know I have covered NESARA/GESARA extensively these past two years. Everything I have said about NESARA/GESARA that it has already been signed into Law by Bill Clinton since 2000 is now corroborated by Colonel Gregory Louis Peck.

What the Kabal does not want you to know, “that NESARA is the Law of the Land.”  They don’t want people to know about it and they are doing everything in their power to prevent the implementation of it.

All those influencers who are saying NESARA/GESARA is fraud, a hoax and attack something they know nothing about.  They are the ENEMY OF THE PEOPLE.  NESARA is to set the people free.

Now you can listen to the full interview of Colonel Gregory Louis Peck here regarding NESARA/GESARA.

The Truth About Nesara-Gesara
https://www.youtube.com/watch?v=VewSZCZekA4
Find Out How the Latest Court Filing Including the Law of Nesara Affects You, Your Property, and Those You Care About.
Making Life Brighter Radio Presents Col Greg Peck.
Winifred sits down with Col Greg Peck to discuss his latest court filing and his big reveal, The Truth About Nesara.  Listen to a compelling conversation as Greg goes in depth on the Constitution, the fraud, and why he filed this case in court and why this document could hold certain parties liable for treason! Find out how you can benefit from his knowledge as well as the filing.  Ask to join his class-action suit if you find yourself in foreclosure or lost a property to foreclosure.
www.thetruthaboutnesara-gesara.com
Making Life Brighter is your choice for conscious education and inspiration!  Please LIKE AND SHARE
#Nesara #Truth #Foreclosures #Fact of law #makinglifebrighter

He also filed a court filing to end the fraud perpetuated by the American Corporation, which you can read here.
https://thetruthaboutnesara-gesara.com/

The military is VERY AWARE of NESARA, and they will be responsible for its enforcement.  We The People need to be more aware of it, and start demanding its implementation.  It is already signed into Law by Bill Clinton.  It’s been law since 2000!

Here is the link to my broadcast about NESARA/GESARA clapping back at Jordan Sather, segment starts at 50:00 min mark 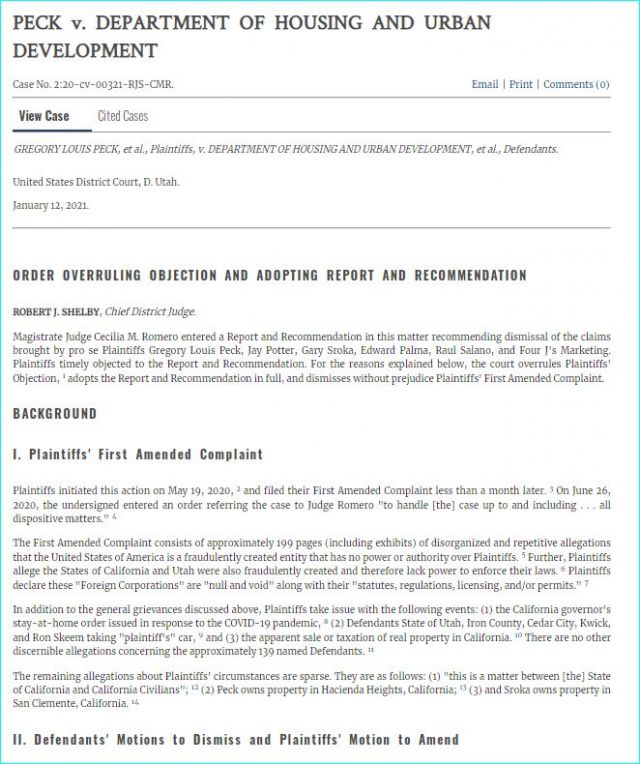 Plaintiffs initiated this action on May 19, 2020,2 and filed their First Amended Complaint less than a month later.3 On June 26, 2020, the undersigned entered an order referring the case to Judge Romero “to handle [the] case up to and including . . . all dispositive matters.”4

The First Amended Complaint consists of approximately 199 pages (including exhibits) of disorganized and repetitive allegations that the United States of America is a fraudulently created entity that has no power or authority over Plaintiffs.5 Further, Plaintiffs allege the States of California and Utah were also fraudulently created and therefore lack power to enforce their laws.6 Plaintiffs declare these “Foreign Corporations” are “null and void” along with their “statutes, regulations, licensing, and/or permits.”7

In addition to the general grievances discussed above, Plaintiffs take issue with the following events: (1) the California governor’s stay-at-home order issued in response to the COVID-19 pandemic,8 (2) Defendants State of Utah, Iron County, Cedar City, Kwick, and Ron Skeem taking “plaintiff’s” car,9 and (3) the apparent sale or taxation of real property in California.10 There are no other discernible allegations concerning the approximately 139 named Defendants.11

II. Defendants’ Motions to Dismiss and Plaintiffs’ Motion to Amend