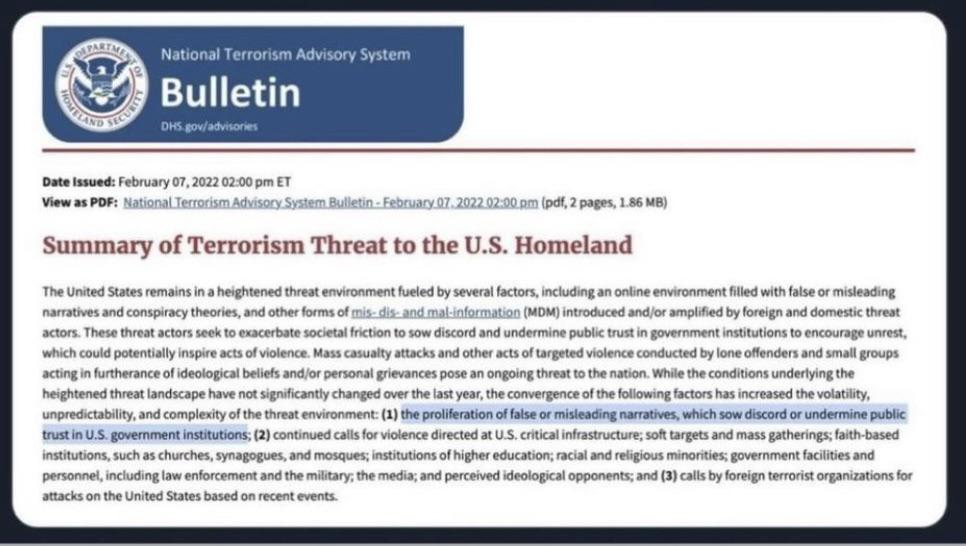 Govt. “THREAT LIST” Names 8 MILLION AMERICANS Who WILL BE DETAINED or EXECUTED When MARTIAL LAW Is Imposed

According to this bulletin, we the people have been reclassified from citizens to terrorists; we the people pose a grave “threat” to the nation because we are guilty of promoting “mis- dis- and mal-information,” which is code language for anyone who criticizes the government’s policies on vaccines, election integrity and theoretically any other hot-button issue they don’t want to hear your opinion about.

Were you aware that we no longer have the right to express an opinion in “free” America” unless it lines up with that of the government and its corporate partners who own the legacy media, Big Tech and Big Pharma?

There’s no mention of al-Qaida, Boko Haram, ISIS, or the Chinese Communist Party in this bulletin. But there are a lot of references to things that regular, everyday Americans do every day, which is write and speak publicly about what they see happening to their country.

That the DHS would go to such an extreme as to condemn and criminalize everyday, protected political speech tells you they must be on the ropes. They must realize the narrative they’ve spent the last two years building is on the verge of crumbling. Their lies about “safe and effective” have been exposed and they are afraid they could be held accountable.

Let’s be frank. The federal government has spent the last two years terrorizing the American people, similar to the way people in Canada, Europe and Australia have been terrorized by their globalist puppet governments. In America, it started with President Trump declaring a national emergency on March 11, 2020, and it hasn’t let up since. In fact, the pressure has only intensified under the Biden administration.

They have terrorized us with their needles, their forced masking of our children, their orders of social separation and forced closures of businesses and churches that were overnight declared “non-essential.”

But when they started telling us we had no right to reject a specific medical treatment, one that was clearly unproven and risky to the long-term health of our people, they crossed a line into a whole new level of government-corporate tyranny the likes of which has never been seen in human history.

Now, on Monday, February 7, the government released a document that serves as the ultimate cherry on top of their authoritarian cake.

The Department of Homeland Security in cooperation with the FBI and the Biden administration produced a bulletin declaring that anyone who so much as speaks against these tyrannical policies will be considered a terrorist threat.

This should tell us three things.

One, the end game is nearing, the point where all of the subtle coercion to get the shots and wear the masks is over. The carrot and stick approach is over. They are pivoting to a new narrative that will likely center on war with Russia and that will give them a new boogie man to blame everything on and deflect the anger of Americans and Canadians to something other than themselves.

Two, this coming war will also give them cover to go after their political enemies. Let me be crystal clear on what I mean by this. We, the subjects of this Department of Homeland Security memo, are not violent people, criminals or traitors. These are everyday Americans and Canadians who love their countries and don’t want to see them devolve into an authoritarian nightmare. The last thing they would ever wish to do is take up arms against anyone. We prefer to see things fought out in the courts, not the battlefield.

Three, the coming war will also put further pressure on already dwindling food supplies, giving the government the option of hording what’s left of the food and doling it out to the obedient ones. In short, they will use food to entice people into the totalitarian system that folks would otherwise reject. This will mean you carry an app on your phone that gives them access to your every move and allows you into certain places after you show your digital papers.

The globalists could also turn public sentiment against the truckers’ Freedom Convoy as that movement starts to result in fewer goods making it to store shelves, even fewer than were already arriving with the purposely disrupted global supply lines.

In short, they will blame the economic collapse that they created through mandates, outsourcing our critical industry overseas and hyper inflationary government spending on the freedom fighters and truckers . . .

Are you on the list? Are you one of the millions of Americans that have been designated a threat to national security by the U.S. government?
Will you be subject to detention when martial law is imposed during a major national emergency?